Crystal Chemistry of a 2M1 Muscovite 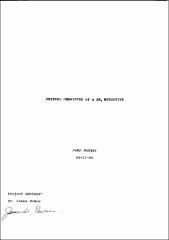 The crystal chemistry and polytype of muscovite crystals picked from an intriguing sample were characterized using electron microprobe and single-crystal x-ray diffraction methods, respectively. The sample consisted of > 2 μm mica crystals and illite clay in intimate contact, with a continuous intermediate size gradation. X-ray powder diffraction of the clay indicated the polytype was lM. Electron microprobe analyses confirmed the > 2μm crystals were muscovite: (K.902Na.097Ba.005)(Al1.692Mg.126Fe.092Ti.072Cr.002Mn.001)(Si3.183Al.817)O10(OH,F)2. X-ray precession hOl and Okl photos were taken and indicated that the > 2μm crystals were of polytype 2M1 in contrast to lM of the clay-size fraction. Three dimensional intensity data consistent with a C-centered unit cell was collected up to 60°, 2θ and reduced with Lorentz, polarization and analytic absorption corrections. Both precession and four-circle x-ray analysis suggested that the crystal was not suitable for a detailed structure refinement. The intimate juxtaposition of 2M1 muscovite with1M illite clay has not previously been documented. The author suggests that one of the phases may be metastable and transition from one polytype to the other may be occurring.