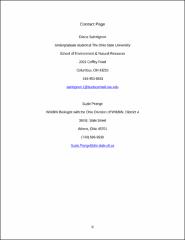 Organisms that are observed to alter their behaviors in the presence of predators are said to be practicing risk behaviors. These behaviors are enacted to reduce the perceivable risk of being attacked when exposed to threats. Reduced foraging is one such behavior. According to the optimum foraging theory, organisms want to spend the least amount of energy as possible to obtain the most of higher quality foods. An organism’s behavior may be influenced by the quantity and quality of food present at a foraging patch, the amount of cover available, and other environmental factors that reduce or increase the chance of encountering a potential predator. In my study the foraging cost of predation of Peromyscus spp. are compared across three successional forest stages; clear cuts (0-10 years), saw timber (40-80 years) and old growth (80+ years) forests, in attempts to understand how forest management practices impact prey behavior. I hypothesized that clear cuts with the highest percent of ground cover will have lower giving up densities (GUD) than other treatments. Peromyscus spp. are an important food source for state-threatened bobcats (Lynx rufus) and state-endangered timber rattlesnakes (Crotalus horridus) so results may prove useful for management of these species. Five food trays were placed at random intervals along 200 ft transects in the three successional stages with three replications. Each feeding station consisted of a track pad and an aluminum pan filled with 1 l. of sand and 5 g. of millet seed. GUD was found using the weight proportion of grams of millet left to the initial amount at each tray. While GUD varied among stands, saw-aged stands appeared to have had risk behaviors practiced at lower levels than in clear-cuts and mature-aged stands despite having the lowest cover available. Variation in GUD could have been caused by a variety of factors that are difficult to control for including locally more preferable food and local predators.