Biogenic silica and phosphate pools in soils of the North Appalachian Experimental Watershed, Ohio: evaluation of the effects of different agricultural practices 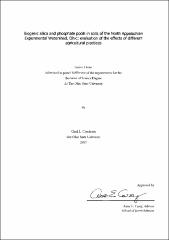 The extent to which human alteration of landscapes affects not only biogeochemical cycles, but also soil and water quality has been shown in many studies. Ohio is home to rich soils derived from glacial deposits and older unglaciated soils, both of which have been extensively utilized for agricultural purposes. This study focuses on small-scale watersheds dominated by agricultural landuse in the North Appalachian Experimental Watershed of Coshocton, Ohio. The watersheds reside in the unglaciated uplands of west-central Appalachia, where residuals soils have been derived from Allegheny Formation siltstones, shales, and sandstones. The site lies within the Muskingham River basin and offers an exceptional arena for study because long term chemical, agricultural and environmental studies have been performed to characterize the site. The sample watershed includes a pasture, conventionally tilled corn, no-till corn without manure, and no-till corn with manure. This study analyzed biogenic silica and phosphate in an area where agricultural practices, especially tilling, are known to enhance erosion and the delivery of carbon to streams. Samples were collected from depths of 0-70 cm below surface in soils derived from sandstone bedrock. Extractions of SiO2 and phosphate were done separately on the samples, which were subsequently analyzed with a Skalar SAN++ System autoanalyzer. The nutrients were observed along a depth profile for each watershed, respectively, to evaluate the role of agricultural practices on the biogenic silica (BSi) and reactive phosphate (P) pools, specifically whether till versus no-till practices generate distinct P and BSi signatures, and the potential effects of manure and N-fertilizers. The goal of this study was to quantify BSi and phosphate in the soils and combine these data with previous work on DSi yields, total alkalinity and carbon transport (POC, DOC, DIC) in the same site to elucidate the distinct effects of these land practices and potential trends or relationships. The findings suggest that the application of manure, more so than N-fertilizers, is a large contributor of phosphorous to landscapes. Also, tilling practices are associated with a lower abundance of reactive phosphate and BSi in the soils; however, the profiles suggest that manure application is a stronger control than tilling in depleting soils of amorphous silica.