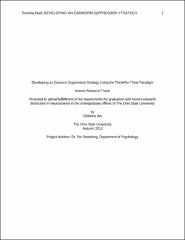 You never know when an earworm will strike. Suddenly that song you heard on the radio yesterday won’t get out of your head, no matter how hard you try. Despite being a common phenomenon, very little is known about the behavioral mechanisms of earworms, or involuntary musical imagery (INMI). The purpose of our study was to identify a neural mechanism for suppression of musical memory, potentially creating a cognitive strategy for terminating earworm episodes. We proposed that the think/no think paradigm developed by Anderson and Green (2001) provides a viable strategy for studying suppression of earworms and effectively, suppressing musical memory. We hypothesized that familiar songs are more likely to be forgotten when participants are actively instructed to not think of them while simultaneously being reminded of the song. In addition, we hypothesized that we can measure neural activation of the songs and the cognitive control regions during no-think periods to predict the drop in memory for those songs. Participants listened to and watched movies of songs, went through the think/no think task, and were tested on their recognition memory for songs that they had listened to earlier in the experiment. There was a significant difference in memory between think and no think items, but there was not a significant difference between think and baseline items. Analysis of EEG data is still ongoing. This was a preliminary study on suppression of musical memory, and we will continue refining our methods to reduce levels of memory activation for no think items during the think/no think task.