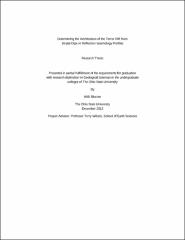 The Terror Rift is the youngest part of the West Antarctic rift system in the Antarctic interior. The Terror rift basin lies beneath the western Ross Sea near the Transantarctic Mountains. The rift has undergone multiple episodes of rifting, as evidenced by superimposed tilts of basin strata in fault blocks that define the rift. A younger tilt pattern has been superimposed on the rift around Ross Island, where the crust has flexed downward under the weight of young volcanoes. Mapping tilt directions provides a means to reconstruct the orientation of faults that produced tilt, and discriminate fault-induced tilt from younger flexure. This study is using seismic reflection profiles, imaging subsurface structure, to reconstruct tilts. Where two seismic lines cross, the true direction of tilt and the magnitude of tilt can be measured at multiple levels downward through the sequence of strata, such that changes in attitudes of bedding with depth can be determined. Maps of tilt directions from multiple crossing profiles for the time period marked by each seismic reflector will allow us to infer the orientations of these surfaces in 3D space. These orientations inform our knowledge of the dynamics of the episodes of rifting and volcano loading along the Terror Rift.