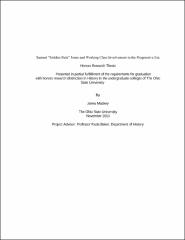 Samuel M. “Golden Rule” Jones was the progressive mayor of Toledo, Ohio from 1897 to 1904. He pursued progressive values based on the golden rule that one should treat others as they would like to be treated. His policies included the institution of the eight hour workday, the building of public resources such as baths and kindergartens, and seeking municipal ownership of utilities. These policies gained Jones significant popularity among voters, and he was reelected repeatedly until his death in 1904. This project will focus specifically on the election of 1899. Jones ran as a Republican in 1897, and his first term was very successful in terms of public approval. In 1899, his renomination should have been assured, as the incumbent, however, the Republican delegates refused, and Jones was forced to run as an independent. The fact that a party would refuse to renominate such a popular candidate is very suspicious and can be explained by the influence of business interest. Jones’s efforts against utilities contracts are primarily to blame. This project will explore the implications of Jones’s overwhelming victory in the election. It will examine the motivation of the voters, and their makeup. It will determine what made Jones so popular, and what that means for the Progressive era as a whole.