A look at selenium as a trace element contaminant, and its relationship to sulfur, in the Kesterson National Wildlife Refuge, California 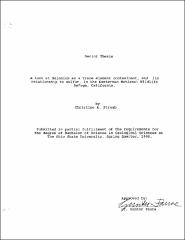 Selenium is a trace element that has warranted considerable attention within the past decade. Selenium is a member of the sulfur family and resembles sulfur both in its various forms and in its compounds. In this research, a case study was analyzed for the toxic levels of selenium in the Kesterson National Wildlife Refuge. Several factors as to why and how selenium accumulated in the refuge are discussed. Also, there is a brief analysis of sulfur and tellurium in relation to selenium and their potential toxicities. Samples collected from the Kesterson National Wildlife Refuge were also analyzed and discussed. A Graphical representation is made to show the enrichment of most environmental systems with selenium, sulfur and tellurium. These graphs were to express a consistent fractionation of sulfur to selenium, but was not conclusive to due insufficient studies in their chemical contaminant relationships. There are very similar chemical and geochemical processes that liberate the toxic compounds of selenium and sulfur and both of these elements could become potentially lethal problems if ignored.