Geochemical analysis of selected metal concentrations of the "Berea Shale" 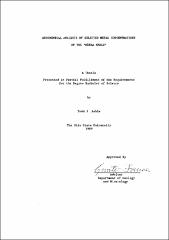