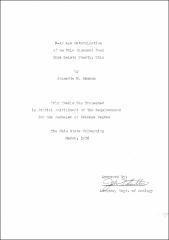 The problem that was researched for this thesis involved the determination of K-Ar dates of biotite and hornblende mineral separates from an amphibolite-gneiss contact zone in the western portion of the Grenville basement of Ohio. The sample was taken from a well drilled by U.S. Steel Corp., Scioto County, Ohio. It was anticipated that the hornblende might yield a pre-Grenville date since it retains argon at a higher temperature than biotite, thus explaining the contact between the older volcanics to the west, being at a higher elevation than the younger metamorphics to the east. The results gave a Grenville date of 957 m.y. which suggests the following possibilities: 1) the ages to the west are not accurate, they are much younger than stated 2) the contact is a result of faulting in the area or 3) the volcanics were not entirely exposed to metamorphism as were the rocks to the east which resulted in argon loss and younger ages. The resulting data was used in a reconstruction of the tectonic history of the Grenville in Ohio and was shown in a model.