An examination of Pennsylvanian sandstones in Southern Ashland County, Ohio 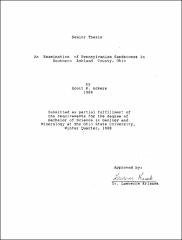 The Sharon Conglomerate and the Massillon sandstone are members of the Pottsville Group of Pennsylvanian age. The Sharon Conglomerate is an orthoquartzite sandstone conglomerate whereas the Massillon is a subgreywacke sandstone. Each sandstone or conglomerate may lie unconformably on older Mississippian age strata of the Logan Formation. The purpose of this study is to identify sandstones in southern Ashland County petrographically and determine their environment of deposition, as well as provenance. The sandstones represent fluvial systems that flowed to the southwest. They have been identified as sublitharenites by the method of composition by volume. This would suggest derivation from a sedimentary and metamorphic source area to the northeast. These sandstones have been identified as the Upper Massillon sandstone in northeast Ohio, by correlating similar source regions studied by Kulikowski (1985) and Meckel (1967).