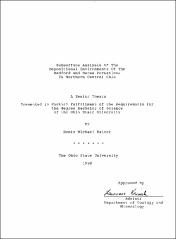 The Bedford and Berea formations of eastern Ohio, western Pennsylvania and West Virginia, and eastern Kentucky have been studied by generations of geologists because of their economic and educational value. The Bedford and Berea are clastic units which display a distinct coarsening-upward trend. Past studies have proposed a prograding deltaic complex as the depositional origin of these formations, but much debate still surrounds the interpretation of specific depositional environments within the Bedford/Berea complex. This study utilized 130 geophysical well logs from Morrow, Knox, and Richland counties to determine the distribution and depositional setting of the Bedford/Berea in north central Ohio. Data collected from these wells were used to construct isopach maps of the Bedford and Berea and surface structure contour maps on the tops of the Ohio Shale and Berea Sandstone. These maps support the general interpretation of clastics prograding to the south and southeast into the Appalachian Basin in late Devonian and early Mississippian time. Some of the isopach patterns strongly suggest influence by pre-existing structures in the Ohio Shale on the deposition of the overlying Bedford Shale and Berea Sandstone. Other patterns indicate the importance of gravity driven flows in depositing these sediments.