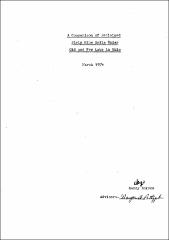 Belmont and Noble Counties, Ohio, have been strip mined since the early part of the century with very few restricitions as to reclamation and mining operations. The Ohio legislature enacted a new strip mine law, which went into effect on April 10, 1972. Under this law, mining operations and reclamation of affected land are carefully controlled. Guidlines and procedures were developed to control runoff and to restore the land, as nearly as possible, to its original condition. Soil samples from three mining areas, two reclaimed under old law and one under the new law, were collected and analized in order to evaluate the effectiveness of new law regulations.