Computational Insights into the Alkylation Reactions of Pyrdine and Pyridinium Quinone Methide Precursors: Studies Towards the Realkylation of Aged Acetylcholinesterase 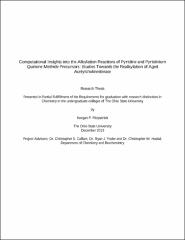 Acetylcholinesterase (AChE) is an essential enzyme in the human body, which hydrolyzes the neurotransmitter acetylcholine into choline and acetate at neurosynaptic junctions. Organophosphorus (OP) nerve agents such as Sarin, Soman, and Tabun are covalent inhibitors of AChE. Following exposure to OPs, AChE is inhibited and undergoes a subsequent irreversible aging process in which the OP-AChE adduct is de-alkylated, resulting in the accumulation of excess acetylcholine in the central nervous system. Current oxime-based pharmaceuticals can only be used to treat the inhibited AChE and are ineffective on the aged AChE. Our research focuses on re-activation of the aged AChE. Quinone methides (QM) have been shown to react with phosphates to form an O–C bond, and such structures may potentially reverse the damage done to the active site on aged AChE through a kinetically favored alkylation of the phosphylated serine residue in aged AChE. Computational methods were used to analyze the potential reaction pathways and docking poses in AChE of pyridine and pyridinium derived quinone methide precursors (QMPs). A model phosphonate group was created and used to study the SN1 and SN2 reaction pathways of the QMP via our computational protocol. The SN1 pathway was determined to be the most energetically favorable mechanism. Snapshots of an aged AChE were used for our docking calculations where the QMPs were allowed to interact with the enzyme active site. Based on docking studies, the most promising therapeutic QMPs are pyridinium complexes with a methylated nitrogen and the alkyl chain at a meta position relative to the oxygen substituent. Studies of molecular dynamic simulations are in progress.