Hilandar Slavic Manuscript 280: Josephus' History of the Jewish Wars and the Tale of Constantinople 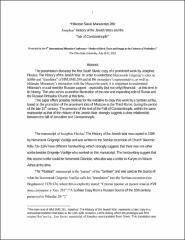 The presentation discusses the first South Slavic copy of a prominent work by Josephus Flavius, The History of the Jewish War. In order to understand hieromonk Grigorije’s roles as scribe and “translator” of HM.SMS.280 and as the monastery’s representative, as well as Hilandar Monastery’s interaction with the Muscovite court, it is important to understand Hilandar's crucial need for Russian support—especially (but not only) financial—at this time in its history. This also serves as another illustration of the new and expanding role of Russia and the Russian Orthodox Church at this time. This paper offers possible motives for the initiative to copy this work by a Serbian scribe, based on the promotion of the prominent idea of Moscow as the Third Rome, during the period of the late 16th century. The presence of the text of the Fall of Constantinople, within the same manuscript as that of the History of the Jewish War, strongly suggests a close relationship between the fall of Jerusalem and Constantinople. Presented at the Sixth International Hilandar Conference: Medieval Slavic Text and Image in the Cultures of Orthodoxy, July 19-21, 2013