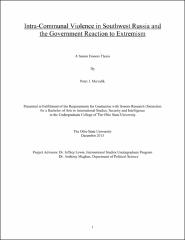 This study examines the recent trends of Islamic radicalization and ethnic nationalism in the southwestern Volga-Ural region of the Russian Federation. On July 19, 2012, a radical Islamic sect, frustrated with regional policies hostile to Islamic fundamentalism, perpetrated an unprecedented terrorist attack against Muslim religious leaders in the city of Kazan, Tatarstan. Such deadly intra-communal violence triggered a strong military response by the Russian government, inciting local opposition from ethnic nationalist groups. Through comparative analysis of original Russian media sources, I assess the potential threat of religious extremism and national separatism in the republics of Tatarstan and neighboring Bashkortostan as well as the government reaction to these developments. I conclude that the ever more forceful government response to secure the 2014 Sochi Olympics and resurging Islamic terrorism following the NATO withdrawal from Central Asia threatens to radicalize more Volga-Ural Muslim individuals. Furthermore, though national separatist groups increased radical activity after the Kazan terrorist attacks, the regional governments of Tatarstan and Bashkortostan strategically manipulate ethnic nationalism to acquire greater autonomy from the federal center. Ultimately, the majority of Tatar and Bashkir society generally rejects the calls for religious extremism and national separatism across southwestern Russia. The results of this project contribute to the growing body of research on the dangers of ethnic minority conflicts for Russian internal security and the international community.