ANALYSIS OF AN EXISTING BUILDING FOR PROGRESSIVE COLLAPSE BY COLUMN REMOVAL 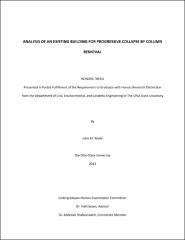 Progressive collapse, also called disproportionate collapse, is a structural engineering phenomenon defined as the failure of a building or other large structure with the sudden removal or failure of a major vertical load carrying component of the structure (such as a first floor column). Although numerous high-profile structures have failed due to progressive collapse (such as the World Trade Center Towers), and structural engineers have developed theories to account for progressive collapse in design, little experimental data exists to validate the theory. Large-scale structures can rarely, if ever, be test in a laboratory setting. The existing theory and design practices tend to produce overdesigned and expensive buildings, where more accurate or refined theory could economize design. This research involves analyzing models of progressive collapse scenarios and comparing the results of the model to experimental data from a recently demolished building on The Ohio State University Columbus Campus. In this experiment, the column of a steel frame building on the campus was removed with demolition equipment, and the response of nearby columns and beams was measured with strain gauges and displacement sensors. One perimeter frame of the building including the removed column was modeled in the structural analysis software SAP2000 and ASI Extreme Loading for Structures.