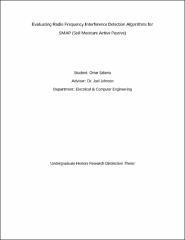 SMAP (Soil Moisture Active Passive) is a mission to be launched by NASA to measure soil moisture of the Earth’s land surface. The SMAP radiometer operates in the L-band protected spectrum (1400-1427 MHz) that is known to be vulnerable to radio frequency interference (RFI). Radiometric observations show substantial evidence of out-of-band emissions from neighboring transmitters and possibly illegally operating emitters. SMAP faces large levels of RFI and also significant amounts of low-level RFI equivalent to 0.1 K to 10 K of brightness temperature. Such low-level interference would be enough to jeopardize mission success without an aggressive mitigation solution. A decision has been made to employ an advanced digital microwave radiometer, the first of its kind for spaceflight, for use on SMAP. The mission takes a multi-domain approach to RFI mitigation utilizing an innovative on-board digital detector backend with DSP algorithms to detect and filter out harmful interference. Four different baseline RFI detectors are run on the ground and their outputs combined for a maximum probability of detection to remove RFI within a footprint. The SMAP radiometer outputs the first four raw moments of the receiver system noise voltage in 16 frequency channels for measurement of noise temperature and kurtosis as well as complex cross-correlation products for measuring the third and fourth Stokes parameters. Evaluating each of the four individual RFI detection algorithms is essential to ensure the highest efficiency produced by the maximum probability of detection. Receiver operating characteristic (ROC) curves are generated for each of the different detectors to evaluate performance. ROC curves plot the probability of detection versus false alarm rate. The optimum case would correspond to the highest probability of detection (PD) and lowest false alarm rate (FAR). A given threshold for the RFI algorithms would produce a corresponding (PD, FAR). The rest of the line curve is graphed by varying threshold from a minimal value to a maximal value. The ROC curves are performed on all different RFI algorithm detectors which include time-domain, cross-frequency, kurtosis, and polarization detectors. Each detector operates differently and behaves differently under different injected RFI. Different injected RFI include pulsed and sinusoidal at different frequencies, amplitudes, and power. The focus of the study is to optimize each of the given RFI detectors given any RFI signal. For example, since the cross-frequency algorithm uses only frequency resolution and no time resolution, its performance should be best for RFI that is localized in frequency. Since continuous wave (CW) RFI are localized in frequency by definition, as expected, the cross- frequency detector performed very well against CW RFI relative to other detectors. The RFI detection performance that is ultimately achieved will be a function of the threshold (that returns the highest PD versus lowest FAR), the nature of the RFI encountered, and radiometer system parameters such as the number of frequency channels and the integration period.