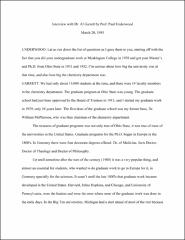 Dr. Alfred Garrett held several important positions at Ohio State. He served successively as Professor of Chemistry, Chair of the Chemistry Department, Vice President for Research, and Chair of the Centennial Commission. He did his undergraduate work at Muskingum College, and earned his M.S. and Ph.D. degrees from Ohio State in 1931 and 1932. Ohio State would undergo many changes during Dr. Garrett’s long association with the university. The Graduate School was not started until 1911, and the total enrollment at OSU was only 13,000 students in 1932. Although Ph.D. programs started in Europe in the 1800’s, they did not become common in the United States until the early 20th century. Harvard, Johns Hopkins, Chicago, and the University of Pennsylvania were the early pacesetters, although the University of Michigan started its graduate school 50 years before Ohio State. Within the Chemistry Department there was little interest in research until William Floyd Evans became Chairman in 1929. Evans recruited a number of excellent young researchers, and the publication profile of the Department expanded rapidly. The new, young faculty members in Chemistry had earned Ph.D’s in some of the most prestigious universities, including Johns Hopkins, Chicago, Princeton, Stanford, Northwestern, Yale, and Michigan. One of them, Dr. Paul Flory, became a Nobel laureate. Several of the graduate students who were contemporaries of Dr. Garrett went on to eminently successful careers in research and industry. Dr. Garrett was, however, one of the few Ohio State Ph.D’s who were invited to join the faculty. He first joined the faculty as an Instructor in 1932. He left for three years to teach at Kent State University, but returned for good to Ohio State in 1935. He was recruited especially to upgrade the first-year general chemistry courses, and he went on to author or co-author a number of successful textbooks. Several were translated into other languages, including Japanese, Spanish, and Portuguese. He also published some 125 journal articles. His first key research project as a faculty member was on equilibria in acid and base systems; this led him in time to the field of photovoltaic cells (batteries). He worked also on fuel cells as well as well as photo cells. His research caught the eye of the National Aeronautical Space Agency (NASA), and he was recruited by NASA to work on rocket fuels using organic molecules called organoboron hybrids. Although several new rocket fuels were developed they were never used since NASA learned how to make a superior hydrogen-based rocket fuel. Dr. Garrett also did valuable research on batteries of various types including a battery that would operate at temperatures of 100 degrees below zero in the Arctic regions. This research on low temperature batteries involved, among other innovations, a neutron activation method which was based on bombarding material with neutrons. This led him into the whole field of nuclear chemistry. In 1949 he was invited to Oak Ridge, Tennessee for further research on nuclear chemistry. After his return from Oak Ridge he wrote the Radiological Defense Manual for the state of Ohio, and the Radiation Safety Code for OSU. His association with NASA continued from time to time. He worked there on the synthesis of possible fuels for rockets, helped developed the NASA educational outreach program, and served on the committee to allocate moon samples to researchers around the country. His growing national reputation in teaching, writing, and research led him to be named a Fellow of the British Royal Academy of Arts, one of many honors he would receive during his long career. Dr. Underwood asked Dr. Garrett to comment on the history of “old Sawtooth,” the well-known (some might have said infamous) chemistry laboratory. The name “Sawtooth” derived from the distinctive design of the roof. The Sawtooth Laboratory opened in 1924 as a temporary replacement for the third chemistry laboratory destroyed by fire at Ohio State. A new facility was needed in a hurry. Unfortunately “the chemists had a reputation of burning down their buildings in the old days.” (p. 8). For much of the 1920’s all chemistry courses were taught in Sawtooth, or until McPherson Laboratory was built in 1929. A building which had been hastily constructed as a temporary expedient in 1924, Sawtooth continued in constant use for 60 years. Over 300,000 students were taught there during that period. Dr. Garrett had fond memories of the old building, a view not universally shared. Dr. Garrett was named Chairman of the Chemistry Department. Since his own student days the number of faculty in the department had grown from 14 to 32, and the number of graduate students from 50 to 250. The Department was rated as Number 15 in the country. Dr. Garrett saw this ranking as very commendable given the fact that Ohio State was an all-purpose university that had no restrictive enrollment. In those days every graduate of a first-class high school in Ohio was guaranteed admission to Ohio State.