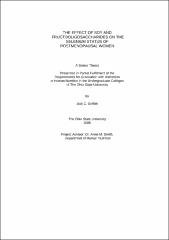 This project focused on the nutritional status of postmenopausal women consuming soy. Specifically, this project examined the effect of soy and a prebiotic fiber source, fructooligosaccharide (FOS) on the status of the trace mineral selenium. Soy intake is of current interest to women’s health because of its potential to decrease the risk of menopausal side effects, and chronic diseases such as heart disease and cancer. Soy’s effects may be elucidated by the plant estrogens it contains. FOS is a prebiotic which can stimulate gut microflora, resulting in a possible increase in soy bioavailability. Soy products typically contain a significant amount of selenium and the soy phytoestrogens may also influence selenium status. Twenty-four postmenopausal women were recruited and were randomly assigned to the placebo (soy/no FOS) or a treatment (soy/FOS) group. During the treatment phase, each woman consumed a soy shake, and either FOS or a placebo powder. Blood plasma samples were collected during the baseline portion of the study (before soy/FOS or soy/no FOS treatment) and at the end of the two week treatment portion. These plasma samples were assayed for selenium concentration, and for the activity of the selenium containing enzyme, glutathione peroxidase (GPx). Selenium status was determined using gas chromatography, and GPx status was determined using a spectrophotometry. Four-day diet records were obtained from each subject at baseline and at the end of treatment and analyzed to determine an approximate daily selenium intake. The selenium in the soy supplement was determined to be bioavailable, as the placebo group had a significant increase (P<0.05) in plasma selenium. However, both the placebo group and the group receiving FOS had a significant decrease in GPx activity, (P<0.014) and (P<0.01) respectively. Thus, the isoflavones in the soy supplement or the FOS may have interfered with the bioefficacy of the selenium in the soy shake.