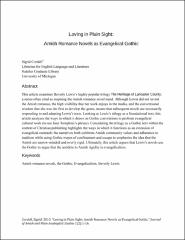 This article examines Beverly Lewis’s highly popular trilogy The Heritage of Lancaster County, a series often cited as inspiring the Amish romance novel trend. Although Lewis did not invent the Amish romance, the high visibility that her work enjoys in the media, and the conventional wisdom that she was the first to develop the genre, means that subsequent novels are necessarily responding to and adapting Lewis’s texts. Looking at Lewis’s trilogy as a foundational text, this article analyzes the ways in which it draws on Gothic conventions to perform evangelical cultural work (to use Jane Tompkins’s phrase). Considering the trilogy as a Gothic text within the context of Christian publishing highlights the ways in which it functions as an extension of evangelical outreach: the narratives both celebrate Amish community values and adherence to tradition while using Gothic tropes of confinement and escape to emphasize the idea that the Amish are narrow-minded and overly rigid. Ultimately, this article argues that Lewis’s novels use the Gothic to argue that the antidote to Amish rigidity is evangelicalism.