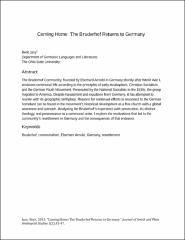 The Bruderhof Community, founded by Eberhard Arnold in Germany shortly after World War I, envisions communal life according to the principles of early Anabaptism, Christian Socialism, and the German Youth Movement. Persecuted by the National Socialists in the 1930s, the group migrated to America. Despite harassment and expulsion from Germany, it has attempted to reunite with its geographic birthplace. Reasons for continued efforts to reconnect to the German homeland can be found in the movement’s historical development as a free church with a global awareness and outreach. Analyzing the Bruderhof’s experience with persecution, its distinct theology, and perseverance as a communal order, I explore the motivations that led to the community’s resettlement in Germany and the consequences of that endeavor.