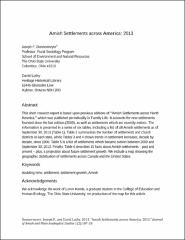 This short research report is based upon previous editions of “Amish Settlements across North America,” which was published periodically in Family Life. It accounts for new settlements founded since the last edition (2008), as well as settlements which are recently extinct. The information is presented in a series of six tables, including a list of all Amish settlements as of September 30, 2013 (Table 1). Table 2 summarizes the number of settlements and church districts in each state, while Tables 3 and 4 shows trends in settlement increases, decade by decade, since 1900. Table 5 is a list of settlements which became extinct between 2009 and September 30, 2013. Finally, Table 6 describes 15 facts about Amish settlements – past and present – plus, a projection about future settlement growth. We include a map showing the geographic distribution of settlements across Canada and the United States.