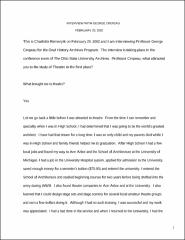 Dr. Crepeau, after service in the military during WWII, abandoned his original dream of being an architect, and shifted his emphasis to theatre, initially as a stage designer at the University of Michigan. He enrolled as a Theatre Major in the Department of Speech, and graduated with an AB and Master’s Degree. During his Ph.D. program at Cornell University, he broadened his interests to include acting, directing, theatre history, criticism and theory. He came to Ohio State in 1959 as an Assistant Professor. He designed theatre productions, and taught courses dealing with theatre history, literature, acting, and directing. With the creation of the Colleges of the Arts and Sciences, the theatre area of the Department of Speech became a separate department – the Department of Theatre. When the Theatre Department offered its Introduction to Theatre course (Theatre 100), Crepeau was one of a team of three instructors, each of whom taught the course from his own “theatre strengths.” One taught the course from the point of view of a Stage Director, another from the Actor’s viewpoint, and Crepeau, as a Stage Designer, taught it from the audience point of view. All three sections were successful, and led to increased enrollments. Links with other departments also were increased, especially with the School of Music and the Department of Dance. The area of research in theatre grew into the Lawrence and Lee Theatre Research Institute. The number and quality of Master’s theses and Doctoral dissertations grew, and led to graduates becoming members of faculties and production programs across the country. There was also a strong outreach program with High Schools. Crepeau believed that all of these evolutionary programs “were going in exactly the direction he believed in.” In addition to his responsibilities in the Theatre Department, Crepeau assumed broader duties in administration. In the fall of 1968 he was appointed to a three-year term on the Provost’s Committee on Academic Affairs under Provost John Corbally. He served on various committees and councils including honorary societies, the Council on Academic Affairs, and, in 1971, under Provost Albert Kuhn, as Assistant Vice President for Curriculum. As his responsibilities increased in central administration they declined in the Department of Theatre. One of his continuing assignments in Theatre was to lead theatre study tours to Moscow and to Eastern Europe. The first such tour occurred in 1968. Earlier he had been awarded the Alfred G. Wright Award in the early 1960’s for his service and participation in student-oriented activity, such as Bucket and Dipper. His career in central administration started in 1968 under President Novice Fawcett. It was a time when the role of a university president was changing. Then the president was seen primarily as an academic person in charge of an institution of higher education, where administrators, faculty, and support people were of the same mind, where the idea of a university was first and foremost an educational institution, and where the president was an on-campus resident, accessible and available almost any time. In the 1970’s the role of a university president began to change. Harold Enarson became president at a time when the campus rioting at Ohio State was coming to an end. Many changes were being made. Universities were becoming large encompassing organizations involving new and different relationships with boards of trustees, with local, state and national and international government agencies, and with various types of research administration and research support. President Enarson was skilled in almost all the areas the changing times required. Once Ed Jennings became President, Crepeau left the Provost’s office, returning to being a professor in the Theatre Department. Temporarily he left Theatre again to serve as Chair of the Department of Photography and Cinema in 1985 to bring some order and stability to an evolving department. When the decision was made to transfer the department from the College of Engineering to the College of the Arts, Crepeau replaced the outgoing chairman. The mission of the department in a new college needed adjustment. After two years a new permanent chairman was selected, but later the Department of Photography and Cinema was terminated, and its faculty widely scattered. Students currently enrolled were allowed to finish their programs. Professor Robert Wagner shepherded the distribution of various pieces of equipment to schools and other universities. Highly valuable collections of films were saved and archived. Looking back on his long and productive career, Dr. Crepeau observed ways in which the intellectual and cultural values of the student body have changed over time. Most students have become much more independent, much more specific goals-oriented, and much more selective and knowledgeable about what they want in their university education. They are much more vocal and critical about the programs they are in if those programs do not meet their expectations. One of the missions of a university is to give the student many opportunities to become well rounded intellectually and culturally. Yet students and parents have always felt that there have been too many general education requirements to the detriment of a specialized education in a selected discipline. Several other important changes and developments also came to mind. The campus riots across the country and at OSU brought major changes to the university and its students. The creation of campuses of medicine, business, and agribusiness is another. The growth of national and international relationships with governmental agencies and industry, and the importance of “grantsmanship” needed to be mentioned. The change from completely open admissions, and the use of the regional campuses in the admissions process, had a major influence on the undergraduate population and programs. Then there was the rise of special programs for women and minorities, and the considerable influence of the computer