Interview of Albert H. Soloway by Virginia B. Hall 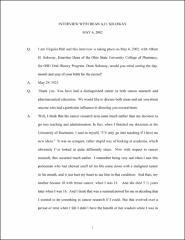