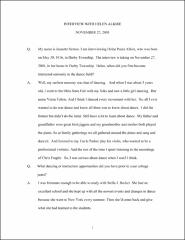 Helen Alkire, Professor of Dance at Ohio State, came from a musical family, and was interested in dance her entire life. Fortunately, she had excellent teachers of dance, including Stella J. Becker, and, as a student at Ohio State, Geneva Watson and Hermine Sautoff. She studied technique, improvisation, and rhythmic analysis. The faculty of the School of Music was equally talented and helpful, notably Eleanor Anawalt, Florence Cafege and Carol White. In time she gravitated strongly to modern dance because of her love of improvisation. She studied the German Expressionist technique pioneered by Mary Wigman known as the “Wigman Technique.” As a student she participated in several dance productions at OSU, and was active in Orchesis, a volunteer group of women dance students. One production of Orchesis was in Mershon Auditorium, and nearly filled the hall. She became familiar with some of the great pioneers of modern dance such as Martha Graham, Doris Humphrey, and Jose Limon. In summers she studied at other universities and in New York, and worked on a doctorate at Columbia. Once on the faculty Alkire helped develop a diverse curriculum for dance majors, including ballet, composition, and Laban notation. She also fostered successful collaborations with the Symphonic Choir in the School of Music. These student productions toured widely including New York, Washington, D.C., Wales, France, Holland and Belgium. The student dance program at OSU originally was housed within Physical Education, but later became a unit of the College of the Arts. Adequate space was often lacking, and the dance program moved over time through several physical locations, including the Ohio Union, laundry facilities, and Pomerene Hall. In 1975 Dance found a permanent home in Sullivant Hall. The musical accompaniment for dance productions ranged from classical to popular – a lot of Gershwin was used. Once Dance was moved from Physical Education to the College of the Arts it became acknowledged as an art form. With this change came also control over its budget, and the ability to plan its own programs. Dr. Jack Corbally, Vice President, was especially helpful. Student musical productions were reviewed by downtown reviewers, unusual for amateur productions. An alliance with the University Choir led to creation of the Symphonic Choir Dance Theatre, which toured in New York, Washington, D.C. and Connecticut, as well as overseas. Over time the Dance program at Ohio State came to be recognized as one of the premier programs in the United States. After Mershon Auditorium was built some Broadway shows were produced which involved dance, theatre, and music. These included “West Side Story,” “Showboat,” “Oklahoma,” “South Pacific,” and “Merry Widow.” No operas were staged. Helen Alkire may be best known through her important work in dance notation. She studied at the Dance Notation Bureau, added two courses in notation to the dance major at Ohio State, and over time she made some significant improvements in the techniques of dance notation. Notation skills were of course necessary in choreography. Some dances were filmed and added to the film library; this was an important adjunct to notation. Notation skills were also found to be useful in activities such as synchronized swimming. Graduates of the Ohio State program in Dance often achieved considerable professional success. About 40% of them became professional dancers, about 60% went into teaching or started their own dance schools. Alkire was active in professional dance organizations, such as, ACDFA (American College Dance Festival Association), CODA (Council of Dance Administrators), and the Association of Ohio Dance Companies. She was awarded an honorary Doctor of Education degree by Ohio State in 1990.