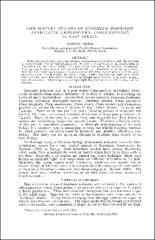 There are two distinct larval generations of Gonometa podocarpi in a year; the first one is between early May to mid-October, and the second one is between the second week in November and the end of April. The last two instars cause the heaviest defoliation. The egg may be parasitized and rendered infertile by a Eupelmid of the genus Anastus. Both the larval and pupal stages of G. podocarpi are killed by Hymenopteran and Dipteran parasites which attack during the former stage. Under experimental conditions, adult moths will not mate unless the males have large enough space in which to fly after emerging from the cocoons. Adult longevity averages eight days for the males and ten days for the females.