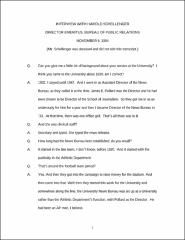 Harold Schellenger was Director of the News Bureau, and later Director of Public Relations, at Ohio State University from 1933 to 1947. He graduated from the School of Journalism in 1924, and for eight years edited a newspaper in Jackson, Ohio. He succeeded as Director James E. Pollard who had been chosen to be Director of the School of Journalism. Originally the News Bureau, which was started before the 1920’s, was intended to publicize the Athletic Department, especially the football program. It reported directly to the President. For some years the Director of the News Bureau was not allowed to attend the meetings of the Board of Trustees. In time, however, the News Bureau gained much greater access to university meetings and personnel. At one memorable meeting of the Faculty Council, Schellenger presented a forthright assessment of the proper role of the News Bureau, i.e. that it could not spin the news to make the university look any better than it was. All the Bureau could do was report what the faculty did, for good or for bad. Despite some discomfiture of President Bevis, the report was circulated to the entire faculty, and indeed all over the country. Various means were used to get out the story of Ohio State to the community at large. Regular news releases were issued, and Schellenger responded to calls from the news media. He also wrote and read each week a fifteen-minute campus news summary on WOSU, the university radio station. Gradually changes were made in the New Bureau. The staff grew from the Director and one secretary in 1933 to seven full-time and seven part-time people, all students, by 1947. The name was changed from News Bureau to the Bureau of Public Relations. The hours were expanded from 8:00 a.m. until 10:00 p.m. every night, plus Sunday afternoon. Another innovation was the creation of the Visitor Information Center. In the early days of the News Bureau newspapers had no regular reporters on campus, and they relied on Schellenger and his staff for information. The Bureau sent out a packet of stories each weekend to all the non-daily newspapers in the state. Among the topics included in the packets would be faculty research and new appointments. Usually the dailies could get what they needed from the wire services. Internal communications between members of the faculty were sporadic, and Schellenger started the Faculty Review that included summaries of Board of Trustees and Faculty Council meetings, and a listing of speeches or publications of all faculty, including instructors. There was also a separate publication in the 1940’s containing news for parents of students. Schellenger came to Ohio State in 1932 in the depths of the Depression. His salary was low, and raises were infrequent. World War II brought many changes to the campus. There were virtually no male regular students. Women were housed in the men’s fraternity houses, and the dormitories turned over to the Army’s specialized trainees; at one time there were 3,500 on campus. Schellenger had one of the first automatic typewriters in the city, the rototype, and using this new machine sent a letter to the parents of every one of the 3,500 specialized trainees. He had fond memories of Bill North, then the single police officer for Ohio State. He recalled less fondly Charles Kettering who gave substantial money to Ohio State to create a Homeopathic Medical College, and then retracted his gift when the regular medical faculty objected. Schellenger was the first President of the American College Public Relations Association, formerly known as the American College Publicity Association. He laments the trend since his own day to choose “fancy titles,” such as the Case Council for Support and Advancement of Education that conceal the fact that it is really public relations they’re concerned with. At Ohio State the Bureau of Public Relations has become the Office of Public Affairs. In 1947 Schellenger left Ohio State to work for a local advertising agency. Then, in 1951, he became for fifteen years Executive Director of the Ohio Foundation of Independent Colleges, and finally served two years as Administrative Assistant to Congressman Chalmers P. Wylie. He also handled publicity for some years for the annual Ohio State Fair.