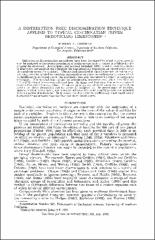 Multivariate discrimination procedures have been developed by which a given sample may be assigned to its correct population of origin on the basis of values it exhibits for the p variables observed. A discrimination method (Kendall, 1966) based on order-statistics is illustrated for possible use whenever the mathematical requisites for discriminant function analysis cannot be satisfied. The method described is distribution free, involves only counting, may be applied to variables measured on or above an ordinal scale, shows which variables are most important in the discrimination, and provides for a region of statistical indecision. The method was applied to petrographic measurements taken from 25 class 1-2 and 25 class 3 limestones collected from the Kope and Fairview Formations, exposed eastern Hamilton County, Ohio. Of eleven primary and derived variables observed, 68 percent of these limestones can be correctly assigned by the percentages of micrite, sparite, broken brachiopods, and crinoids, whereas the remaining 32 percent are included within a region of indecision. In this case, the discriminatory efficiency is not significantly increased by using more than the four variables listed above.