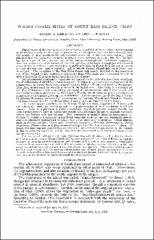 Distribution of the tree species in present-day woodlots on South Bass Island appears to be related mainly to the stage in succession, which apparently correlates directly with the length of time available for reforestation since the initial extensive cutting. Such reforestation has occurred primarily in places where bedrock is so shallow that the land has been rejected for vineyard use or for human development. Substrate apparently does not control the distribution of the tree species, as bedrock throughout the forested areas of the Island, with one exception, is uniformly Silurian Put-in-Bay Dolomite, which is very shallow and locally exposed, and in which Romeo (Randolph) soils have been developed. The exception is the Box Elder-Green Ash woods, located on the northeast end of the Island, where bedrock is unusually deep (17 1/2 feet) and is covered by till, in which Hoytville (Catawba loam) soils have been formed. Six arborescent community types are recognized in the Island's remaining woodlots, the distributions of which have been mapped. Earliest in successional development of the communities is Young Hackberry, represented by Miller's Woods, followed by Hackberry- Blue Ash, represented by woodlots north of the lighthouse. Also early in succesion are the Box Elder-Green Ash community, as found on the northeast end of the Island, and the Cedar woods, represented by Heineman's Woods, which owes its great abundance of cedar to intensive grazing during the mid-1940's. A more mature type is the Sugar Maple-Hackberry-Basswood community, represented by Victory Woods and Cooper's Woods, and most mature of all is the Maple-Oak-Hickory type, as found in Duff's Woods. The more mature woodlots on the Island, where the dark, organic-rich Romeo soils are relatively thick, are characterized by a predominance of Acer saccharum in all size classes. Next in importance is Celtic occidentalis, which is present in most woods, but which predominates only in submature woods with abundant dolomite bedrock outcrops, where the Romeo soils are thinner. Tilia americana is usually third in importance, although its values are normally much lower than are those of the two dominant species, and it is generally represented by only a few large trees and no saplings. Other species, such as Prunus serotina, Morus alba, Juniperus virginiana, Fraxinus quadrangulata, Ostrya virginiana, Ulmus rubra, and Quercus muehlenbergii, have far lower importance values. Of these, the first four are regarded as successional, the first-named species being the earliest in the successional sequence, and the last four are considered to be minor members of the mature community. The scattered individuals of oaks (Quercus alba and Q. rubra) and hickories (Carya sp.) which occur in the Maple-Oak-Hickory community are the most difficult to explain, because of their limited distribution and because of the lack of any apparent correlation between their occurrence and either the substrate or the successional sequence which appears to control the distribution of the rest of the tree species. These oaks and hickories are believed to represent the normal climax associates of such stands, interpreted to occur in such restricted numbers only because of the extreme favorableness of the dark, organicrich soil on the shallow dolomite bedrock for Acer saccharum.