The depths of magma chambers under the Galapagos Ridge 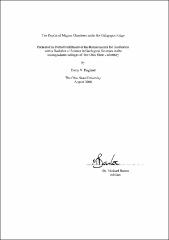 The Galapagos Ridge System is one of the most unique ridges on the Earth. Galapagos spreads at an intermediate rate of 47 to ~63 mm/yr (Canales et al., 2002). We speculate that spreading rate may influence the depth of partial crystallization and the structure of magma plumbing systems beneath ridges. To constrain the depth at which partial crystallization of magmas occurs beneath the GSC, we have used a method to calculate the pressure of crystallization that is more accurate and reliable than similar methods, such as that described by Claude Herzberg (2004, Journal of Petrology). The method involves calculating the pressure at which a liquid, represented by volcanic glass, is chemically in equilibrium with olivine, plagioclase, and augite. Our data set is comprised of analyses of volcanic glass collected on scientific cruises along the Galapagos ridge. These analyses were downloaded from the RIDGE data base which is maintained by Lamont-Doherty Earth Observatory. Filtering of the analyses was necessary to exclude glasses that were not in equilibrium with olivine, plagioclase, and augite. The 1,110 remaining glasses were then divided into twelve groups based on longitude. Results indicate that Galapagos magmas crystallize over a range of pressure from 0.07- 9.36 kBar, equivalent to 0.23 to 32.94 km depth, but that most crystallization occurs at 2.99 ± 1.92 kBar, or a depth of 10 ± 2.5 km. Some of these chambers are probably located just beneath the crust in the uppermost mantle. This range of depth suggests that the magma plumbing system is complex and is likely composed of multiple, stacked chambers that are interconnected by dikes. In fact, we are finding evidence for magma chambers at two different depths on the more western end of the ridge, whereas there seems to be evidence for a single magma chamber on the more eastern end of the ridge. Emily Klein and co-workers have shown that Na8 (Na normalized to 8.0 wt % MgO) is a measure of crustal thickness with low values indicating higher mantle temperatures and greater degrees of melting. Overall, we find that Na8 decreases with increasing depth, and is exceptionally low near 92° W which lies on the same latitude as the Galapagos hotspot. Implications for the interpretation of the Galapagos magma plumbing system include the possible influence of the Galapagos hotspot as well as transform faults near the western end of the ridge on magma plumbing systems.