Basin compartmentalization in the Sierra Pampeanas of Northwestern Argentina: case-study of the El Cajón Basin 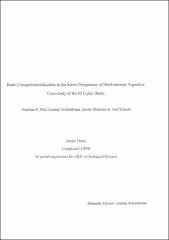 In order to characterize the propagation of an orogenic wedge into the foreland in a thick-skinned setting, the El Cajón Basin in Northwestern Argentina was chosen as the locale for a case-study. The El Cajón Basin serves this purpose well as it has previously been incorporated into the morphologic Puna Plateau of the Central Andes and has since been exhumed. The exhumation of the basin allows the study of deformation within the basin s three allostratigraphic formations, the Peñas Azules, the Playa del Zorro and the Totoral formations. Two cross-sections have been generated in this study from geologic mapping of the basin and are coupled with previously interpreted seismic data from the Campo del Arenal Basin, just south of the El Cajón Basin. These data and new U-Pb geochronology of tuff beds within the basin stratigraphy allow a more comprehensive understanding of the temporal and spatial evolution of the El Cajón Basin in a regional context. Of particular interest is the timing of uplift for the Sierra de Chango Real, the western bounding range of the El Cajón, the Sierra de Quilmes, a basement-cored anticline that separates the El Cajón Basin from the Santa María Basin to the east, and the Sierra Aconquija, which separates these intermontane basins from the foreland to the east. The new U-Pb ages indicate an in-sequence pattern of deformation across the foreland, with the Sierra de Chango Real uplift at 13.6 Ma and the Sierra de Quilmes at ~8-12 Ma as determined from this study, and the Sierra Aconquija at ~6 Ma [Sobel & Strecker, 2003]. The Sierra de Quilmes is also shown to have propagated from N to S, consistent with predictions based on the oblique-angle subduction of the Juan de Fernandez ridge beneath the South American plate. Geologic evidence shows that deformation is largely controlled by pre-existing basement fabrics and faults, with high-angle reverse faults as the dominant mode of shortening. Together these data provide a model for an east to west in-sequence propagation of the orogenic wedge with a north to south influence that is largely controlled by pre-existing basement structures. Each progressive uplift compartmentalized a piece of the foreland into a basin that was then filled and incorporated into the plateau, a model of orogenic wedge propagation vastly different from those seen in thin-skinned settings.