Was there a 1930's meltdown of Greenland glaciers? 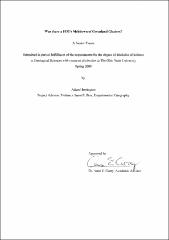 Warming around Greenland (1994-2007) has been implicated in widespread glacier recession observed by satellite sensors. To better understand if the recent glacier behavior is abnormal, we use maps, photos, and documentary data from 20th century expedition reports to document if similar glacier response occurred during an analogous warm period beginning in the 1920s. Analyzed together with existing published data, I find that the years containing the greatest proportion of retreating land terminating glaciers over a 90 year record (1870-1960) were 1920-1940 and that of marine terminating glaciers were 1930-1950 over a 140 year record (1850-1990). Furthermore, four marine terminating length change records show rapid length changes concurrent with anomalously high annual air temperatures, all occurring between 1923 and 1946. Thus, the recent precisely-documented Greenland glacier recession can be regarded as a case of a highly sensitive system useful in indicating climate change.