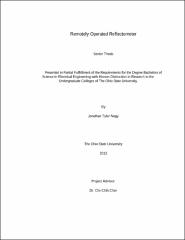 In the field of electromagnetics, one of the most fundamental parameters that describe a system is the reflection coefficient. This is the ratio of the reflected fields to the incident field and is inherently a complex number describing both magnitude and phase. The reflection coefficient is typically measured by instruments called vector network analyzers (VNA). Although VNAs are very useful and necessary tools in a laboratory, their extensive capabilities are commonly underutilized by a single application. In addition, their size, weight and cost make them impractical in situations requiring mobility. Therefore, this research is being conducted with the goal of creating a wireless, portable and cost effective reflectometer. The device has been constructed from commercial-off-the-self (COTS) components to keep costs at a minimum. The core measurement component of the reflectometer is a magnitude and phase detector by Analog Devices. Other critical components are two directional couplers used to sample the incident and reflected signals and feed the detector. Also, a wideband stepped-frequency source is used to generate the incident signal. Finally, a microcontroller with a Bluetooth module is used to control the system as well as collect and send data to a smartphone for the user’s analysis. In the end, a portable reflectometer was developed that can measure the complex reflection coefficient over a wide bandwidth and wirelessly graph the data on an Android smartphone. Through data processing and calibration algorithms the measurements are fairly accurate, but suffer the most from a phase ambiguity in the magnitude and phase detector. Ultimately, this device is able to significantly reduce the cost and size of systems in need of reflection coefficient measurements while providing a convenient smartphone user interface.