Effects of Temperature on Seta Elongation in Atrichum Undulatum 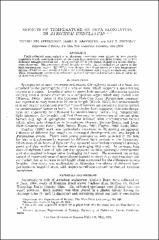 Field-collected gametophytes of Atrichum undulatum were placed in two growth chambers which were maintained at the same light intensity and light period, but at two different temperature regimes. After sporophyte development, differences in seta lengths were observed. Measurements of cell lengths revealed that attached setae grown in the high-temperature regime (12°-22°C) were longer than those grown in a low-temperature regime (3°-12°C), as a result of both more cell divisions and a larger average cell length. Thus, temperature appeared to influence both cell division and cell elongation in the setae of Atrichum undulatum.