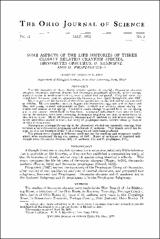 The life histories of three closely related species of crayfish, Orconectes obscurus (Hagen), Orconectes sanborni (Faxon) and Orconectes propinquus (Girard), which occupy separate rivers in northeastern Ohio, were studied and compared. Crayfish were collected from the same location, approximately bi-weekly, from April through October 1967. Major aspects of life histories of the three species are similar and can be summarized as follows. Mature crayfish mate in August and September; eggs are laid in April and May and young become independent in June. Growth and activity cease during the winter and resume in the spring. First-form males change to second form in the spring and in late summer revert back to first form. Immature individuals molt several times during the summer, each time increasing in carapace length by one mm, or sometimes by two mm or more. Males of Orconectes obscurus and 0. sanborni do not attain sexual maturity until their second summer, but many 0. propinquus males become sexually mature in their first summer. Attempts at interspecific mating in the laboratory yielded one successful mating, that between a male Orconectes propinquus and a female 0. sanborni. This female could not be kept, so it is not known whether viable young would have been produced. The pleura were clipped in different combinations for marking and recapture studies which were conducted during the summer of 1967. Rates of recapture of marked individuals were: Orconectes obscurus, 28%; 0. sanborni, 1%; and 0. propinquus, 14%.