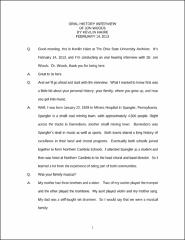 Dr. Jon Woods was born January 22, 1939, in the coal mining community of Spangler, Pennsylvania. He attended Indiana University of Pennsylvania, majoring in music education and trombone performance, while playing in the marching band and the symphony orchestra, as well as singing in the men’s glee club. His senior year of college, 1959, he was named band and choral director of his hometown’s high school, splitting time between work and school. A few years later he was offered a graduate assistant job at Penn State University. In 1968 he was accepted as a Ph.D. candidate at the University of Michigan and he received his doctorate in 1973. It was there that he first witnessed the OSU Marching Band in action. Little did he know that he would be working for Ohio State a few months later—and would still be there 38 years after that. During that time, he says, he made changes, such as using computers to design the shows, but tried to make such changes gradually so they would be more easily accepted. In the end, he says, he believes he improved the band, but he also believes his successor, Jon Waters, will make the band even better.