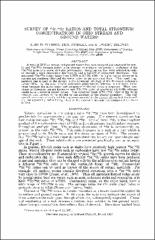 A total of 23 Ohio stream and ground waters has been sampled and analyzed for total Sr and 87Sr/86Sr isotopic ratios in an attempt to evaluate the potential usefulness of the 87Sr/86Sr ratio as a tracer of water provenance. Sampling stations were selected in order to provide a wide geographic distribution and a variety of contacted lithologies. The measured 87Sr/86Sr ratios range from 0.7078 to 0.7130, with the higher ratios occurring in eastern and southern Ohio and the lower ratios to the north and west. This trend is apparently due in part to the change in the dominant lithology of the Paleozoic sediments across Ohio. In the east, clastic sediments predominate, whereas in the west, limesstone becames the major important component of the sedimentary sequence. Most limestones of Paleozoic age are known to have 87Sr/86Sr ratios of approximately 0.708, whereas shales have a range of higher values. The observed trend in 87Sr/86Sr ratios of the water samples also appears to be related to the position of the glacial boundary. The widspread occurrence of easily soluble carbonate material in the glacial till north of the boundary has apparently had a strong effect on the strontium isotopic compositions of the local waters.