Interview of Mateja Matejic by Leon I. Twarog 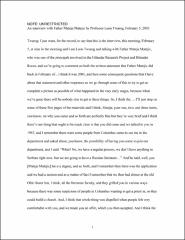 Both Father Mateja Matejic, a Serbian Orthodox priest, and Professor Leon Twarog were principals in the creation and development of the Hilandar Research Project and Hilandar Room, both key elements in the distinguished Slavic Studies program at Ohio State. In 1967, Twarog invited Father Mateja, a Serbian specialist, to join the faculty of the Slavic program. Mateja accepted, although he continued his duties as an Orthodox priest, at first commuting from Cleveland, and later on in Columbus as a new church was built there. He was paid no salary by the church, and received no benefits. In Twarog’s view, the church was built in Columbus with the money saved by not paying any salary to Father Matejic. The father always gave “100% and more” to his department at Ohio State. This fact is illustrated by a difficult trip to Greece in 1967 to visit the Serbian Hilandar Monastery on Mt. Athos, the Holy Mount. He was accompanied for part of his visit by his friend, Paitsi. The purpose of the trip was to photograph rare manuscripts and other materials in the Hilandar library. Some 139 complete Slavic manuscripts, various edicts, etc. were filmed first (1970) with the assistance of Professor of Photography, Walter Craig, and later (1971) with Predrag Matejic, Father Mateja’s son. Filming proceeded outside in the sunlight as rapidly as possible using rolls of 36 exposures, 35 mm film. In the summer of 1971 there was another trip to Greece to microfilm more documents. Some miscommunication and misrepresentation presented unexpected obstacles to the project. Nevertheless, Father Matejic and Predrag reached the monastery and resumed their work. In six weeks of constant filming, some 3,400 rolls of film were shot. Hilandar, a Serbian monastery, was only one of many in Greece (Mount Athos). Zograf is Bulgarian, St. Panteleimon is Russian, and the others, such as Lavra and Iviron, are Greek. Some microfilms of documents were obtained from monasteries other than Hilandar with the assistance of Andrija Jakovljevic, formerly of the School of Music at OSU. Matejic had reason to believe that other Slavic manuscripts likely exist in other monasteries in Greece that have never been filmed. At Hilandar, Father Mitrofan, a childhood friend of Father Matejic’s, offered valuable assistance. Others who were encouraging or offered helpful advice in these microfilming efforts on Mount Athos: Professor Alexandar Fol, Minister of Education for Bulgaria, Professor Peter Dinekov, a member of the Bulgarian Academy of Science, and Father Sarris. There was a third photographic expedition in the fall of 1975. The documents from these three photographic expeditions of 1970, 1971, and 1975 today form the core of the Hilandar Room (now Hilandar Research Library) collection at Ohio State, a repository that has a worldwide reputation for excellence.