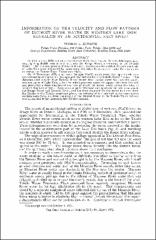 On 2 December 1970, a dock of the Detroit Bulk Dock Inc., in Detroit, Michigan, gave way, spilling 20,000 tons of rock salt into the Rouge River, a tributary of the Detroit River. The rate and pattern of flow of the salt into the southern end of the western basin of Lake Erie were measured by monitoring the chloride content of Lake Erie water received at the Toledo Water Treatment Plant. On 10 December 1970, a salt-rich (35 ppm NaCl) water mass, having chloride concentrations twice the normal background, was detected at the Toledo Water Intake. This demonstrated clearly that Detroit River water does indeed move far into the southwestern basin of Lake Erie, a fact for which previous scientific support has been limited, and permitted a determination of the rate at which the water moves across the lake, at least at this time of year. After correcting for the time during which the salt mass was in the Rouge River and Detroit River, and the time required for the water to travel from the Intake to the Toledo treatment plant, the velocity of this salt-rich water mass across western Lake Erie, i.e. from the mouth of the Detroit River to the Toledo Water Intake, was calculated to be approximately 0.3 feet/second.