Intermediate levels of Smad2 and Smad3, and insights into TGF-β signaling thresholds 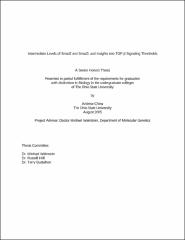 The Smads are intracellular mediators of the signaling cascade initiated by the Transforming Growth Factor-Beta (TGF-beta) superfamily of ligands. Notable ligands include TGF-beta, bone morphogenic proteins (BMPs), nodal, and activins. These ligands affect a broad range of processes that including development, differentiation, homeostasis, and apoptosis. One mechanism of ligand signal regulation involves dose-dependent nature of Smad transcriptional regulation. Two distinct, although parallel, Smad pathways exist. Smads 1, 5, and 8 mediate BMP signals while Smad2 and Smad3 mediate TGF-beta, activin, and nodal signals. Studies of Smad2 and Smad3 via knockout technologies reveal Smad3 functions in bone development and immune system function while Smad2 is required for gastrulation and proper development of anterior and midline structures. Combinational studies using traditional Smad2 and Smad3 knockout alleles uncovered a synergistic effect of Smad2 and Smad3 on liver development. Using a hypomorphic allele of Smad2, my studies of this interaction suggest that all abnormalities arising from insufficiencies of Smad2 and Smad3 mediation have been described, and that the abnormalities observed represent a continuum of abnormalities related to the amount of TGF-beta-like signaling mediated by Smad2 and Smad3.