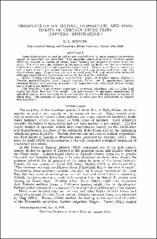 Some observations on mating and oviposition behavior in some common midwestern species of ephydrids are described. The mounting phase of mating in Ochthera mantis (DeGeer) appears to consist of simple, rapid jumping and grasping movements by the male. The male taps the abdomen of the female with his hind tarsi during copulation. Copulation is similar in Parydra quadrituberculata Loew. During seven days of captivity, two females of the latter species deposited 119 separate egg masses, each containing from two to eleven eggs. Oviposition sites such as small rocks and twigs extensively encrusted with egg masses of this species were commonly found in field habitats. Shelter-seeking behavior was also observed. Adults of Ochthera mantis (DeGeer), Parydra quadrituberculata Loew, Scatella stagnalis Fallen, and S. quadrinotata Cresson obtained shelter by clustering in numbers on vegetation and other high objects during heavy rainfall and darkness. The hypothesis that diatoms constitute a potential, abundant, and available food source for shore flies was also tested. The gut contents of specimens representing 30 ephydrid species were surveyed by dissection and by nitric acid digestion of masses of whole flies. The presence of diatom frustules in these guts was interpreted to support this hypothesis.