The Compositae of the Oak Openings 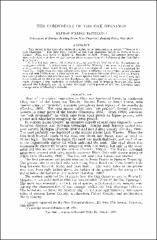 This report is the first of a series of articles to be prepared as a second "Flora of the Oak Openings." The first floral survey of the Oak Openings region in western Lucas County, Ohio, was made by Edwin L. Moseley in 1928. During the present investigation, collecting was done at eight major sites, representing the habitats of the Oak Openings region. Of the 113 taxa annotated in this study, 88 taxa have been found by the present investigator (1970). Nineteen taxa were reported by Moseley that were not found in this study; twenty were found during the present investigation that were not reported by Moseley. Eight taxa are more common now than in Moseley's time (1928); twelve are less common now (1970) than in Moseley's time. The reasons for these changes are not known, but some probable explanations are: (1) some species have come in along Swan Creek and have established themselves in the fioodplain; (2) some species are adventive; (3) manmade changes along roadsides, in cultivated fields, and in housing developments have altered the habitats; and (4) a more thorough investigation of the Oak Openings may change some of Moseley's records.