Pose Slides (Joel E. Rubin Collection)
JavaScript is disabled for your browser. Some features of this site may not work without it. 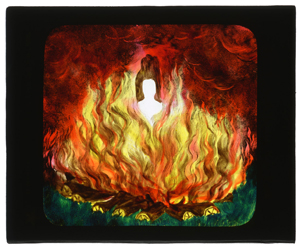 Pose slides were used to create a type of tableau vivant ("living picture") performance that was popular in vaudeville at the beginning of the twentieth century. An actress dressed all in white posed against a white background. Then, when a slide was projected onto her, it appeared as if she was in a costume or in a unique environment.

Any parties desiring publication, exhibition, or other public use of materials reproduced from this collection must obtain written authorization from The Jerome Lawrence and Robert E. Lee Theatre Research Institute of The Ohio State University Libraries.

In requesting permission to reproduce materials from the collections of the Ohio State University Libraries as described, the requester agrees to hold harmless the Ohio State University and its Trustees, Officers, and agents either jointly or severally from any action involving infringement of the rights of any person of their heirs and descendants in common law or under statutory copyright.