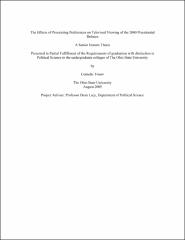 By examining survey data from viewers before and after each of the 2000 presidential debates, the overall effect of the events was examined. In particular, attention was paid to how preexisting preferences, such as party identification and ideology, were related to whether respondents watched the debates, as well as who respondents predicted would win each debate beforehand and judged to have won each debate afterward. Additionally, the relationship between how strongly respondents supported their preferred candidates and their predictions of that candidate winning the debates, as well judgments of that candidate having won the debate, were examined. Finally, connections between perceptions of the debates and actual voting decision were analyzed, showing little change in the voting choice of many respondents during the course of the study.