Use of Soil Surveys in the Identification of Floodplains 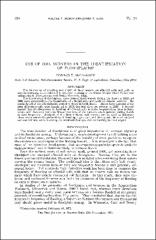 The frequency of flooding and depth of flood waters on alluvial soils and soils on stream terraces, was evaluated in selected sections of the Great Miami River Valley and tributaries in Montgomery and Preble Counties, Ohio. The boundaries of the highest elevations of flood waters during the floods of 1913 and 1959 were compared to the boundaries of alluvial soils and soils on stream terraces. Essentially all of the alluvial soils were inundated in both floods. About forty percent of the area of terrace soils were inundated in 1913, but less than ten percent in 1959. It is estimated that the frequency of flooding of alluvial soils is more frequent than once in forty years, and that only the very lowest portions of the terraces are inundated during floods of that frequency. Analysis of the data indicate soil surveys can be used to delineate those areas where the probability of flooding is greatest, and thus where the need for land use restrictions, such as zoning, to minimize damages due to flooding is most urgent.