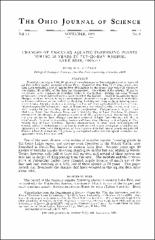 Based on a survey in 1898, 40 species of vascular aquatic flowering plants were reported for Put-in-Bay harbor in western Lake Erie. Studies of this flora at various times since then have revealed a loss of species from this harbor to the extent that today 20 species of the original 40, or 50%, of the flora has disappeared. Only three of the original 40 can be considered to be common or abundant today in the harbor. During the same 70-year period, only four submersed species have invaded the harbor. Possible reasons for these changes, such as increase in water temperature, decrease in oxygen, increase in turbidity, and man's influence on the harbor by dredging, building retaining walls, increasing use of motor boats, dumping of domestic sewage, and runoff from agricultural land are all considered as possible factors that have, independently and interrelatedly, in part or in total, been responsible for this 50% loss in species composition. Comparisons with data from studies of Lake East Okoboji, Iowa, and University Bay in Lake Mendota, Wisconsin, reveal that the changes in species composition of the aquatic flora in Put-in-Bay harbor are very similar to those changes that have occurred in Lake East Okoboji, and that a trend similar to that in Put-in-Bay harbor and Lake East Okoboji is developing in University Bay of Lake Mendota. Species characteristic of clear, cool, well-oxygenated waters, whose distributions are primarily northern and whose ecological tolerances are apparently narrow, have disappeared, whereas species of turbid, warm, poorly oxygenated waters, whose distributions are primarily widespread and whose ecological tolerances are apparently wide, have survived.