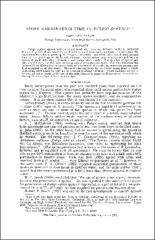 Fuligo septica spores were selected randomly from six different aethalia collected within fifty feet of one another, on The Ohio State University campus. In each case the specimens were found growing on Paygro, a shredded hardwood-bark mulch used around most of the plantings of the O.S.U. campus. Germination time was determined for the spores of each individual aethalium and comparisons made. The number of spores per cubic millimeter, the pH, and the temperature were also recorded. Germination occurred in from 35 to 92 minutes in spores from all but two of the aethalia, where no germination had occurred as of two hours. The germination times for all spores taken from a single aethalium were found to vary by an average of about +/- 10 min. Spore viability seems to be related not so much to the age of the aethalium as to some condition or set of conditions during the formation of the fructification.