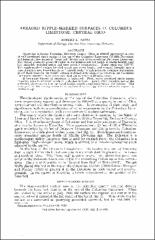 Quarrying in Scioto Township, Delaware County, Ohio, in 1966-67 uncovered an area of well-developed ripple marks at the top of the Columbus Limestone (Middle Devonian) and beneath a few inches of "bone bed" at the base of the overlying Delaware Limestone. The ripples averaged about 19 inches in wavelength and 1.5 inches in ripple height; they had smoothly rounded crests and were notably symmetrical. Their trend was N23°W. The ripple-marked surface beveled corals and other fossils, and merged laterally into a type of surface long known locally as "smooth rock," which is clearly a surface of abrasion. In all these respects the rippled surface is remarkably similar to others in the Columbus Limestone, reported many years ago, that are as much as 85 miles away. A two-stage history of formation is indicated. First, waves produced ripple marks in poorly sorted carbonate sands on a shallow bottom. Later, after consolidation of the sediment, storm waves were agents of intense scouring and smoothing of the bottom. The later part of this history seems to be confirmed by analogy with a carbonate deposit of Holocene age.