Electrophoretic Analyses of Serum Proteins of the Albino Rat 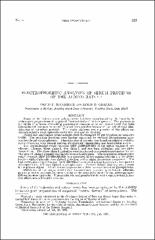 Study of the leukemias and polycythemia has been complicated by the inability to isolate pure preparations of suspected "control factors" of hemopoiesis. The presence in rat serum of a factor controlling granulocyte maturation in rat bone-marrow has been demonstrated, but precise analysis has not been possible because of the lack of clear identification of rat-serum proteins. This study analyzes serum proteins of the albino rat through relative electrophoretic mobilities and specific staining. Pooled rat- and human-serum samples were fractionated by gel nitration on Sephadex G-200. The resulting fractions were further separated by vertical discontinuous polyacrylamide gel electrophoresis. Identification of proteins was based on relative mobility and on reactions with general portein, glycoprotein, lipoprotein, and haptoglobin stains. The low-molecular-weight fraction (MW 5,000-150,000) of rat serum contained prealbumin, albumin, three alpha-1, five alpha-2, and two beta globulins, and two alpha lipoproteins. The three alpha-1 globulins were implicated as a possible maturation factor. The slowest alpha-2 globulin was shown to be a haptoglobin. The intermediate-molecularweight fraction (MW 150,000-300,000) was composed of two gamma globulins, a benzidinepositive alpha-2 globulin, two alpha-1 globulins, and an alpha lipoprotein component. The high-molecular-weight fraction (MW 300,000+) contained a beta-lipoprotein, two gamma macroglobulins, and two alpha-1 macroglobulins. Further diffuse staining was present in the gamma region. All of the non-lipoproteins in these two fractions were glycoproteins. Mobilities of the major identifiable human-serum proteins (prealbumin, albumin, gamma globulin, haptoglobin) were similar to the same proteins in the rat, although many differences were apparent. Human albumin and prealbumin formed a separate fourth fraction which was not found in the rat.