Productivity of White-Tailed Deer in Ohio 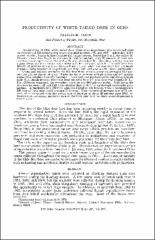 Productivity of Ohio white-tailed deer (Odocoileus virginianus) was calculated from examination of 651 reproductive tracts obtained between 1951 and 1967. Adult doe (1.5+ years) breeding begins in late October and peaks between November 3 and November 16. Precocial-fawn does begin to conceive in mid-November, with 70 percent of fawn conceptions occurring between November 24 and December 21. Breeding activity reaches a peak about one week earlier north of latitude 40° compared with that in southern Ohio. Nearly 77 percent of the fawn does and all but one adult doe examined had ovulated. Precocial-fawn breeders averaged 1.29, yearlings 1.87, and adults 2.04 fetuses per breeder. Ovum and embryo mortality for the first three months gestation averaged 11.5 percent for all age classes of does. Fawn mortality between mid-gestation and 5-7 months postpartum totaled at least 21.9 percent. Fawn and yearling does carried significantly more male than female fetuses, while the fetal sex ratio from 2+ year does was essentially 1:1. For all fetuses examined, the secondary sex ratio was 58.6 percent males. Male fawns die at a rate between 1.22 and 1.26 times greater than do females up through six months postpartum. A representative 100 Ohio does could produce 153 fetuses, while a representative 100 deer of both sexes could produce 74 fetuses. This theoretical increase rate of 74 percent, when compared with the actual rate of increase of about 20 percent since 1962, indicates that the annual mortality rate of the Ohio deer herd has been about 50 percent in recent years.